About National Survey of State Laws

National Survey of State Laws (NSSL) is a print and online resource that provides an overall view of some of the most-asked about and controversial legal topics in the United States. This database is derived from Richard Leiter’s National Survey of State Laws print editions. Presented in chart format, NSSL allows users to make basic state-by-state comparisons of current state laws. The database is updated regularly as new laws are passed or as legislation changes.

The current 9th edition, along with the 8th, 7th, 6th, and 5th editions, are included in database format, which allows users to compare the same laws as they existed in 2005, 2008, 2015, 2018, and 2022, and to make more current comparisons with laws added or updated in the database since the publishing of the most recent print edition. 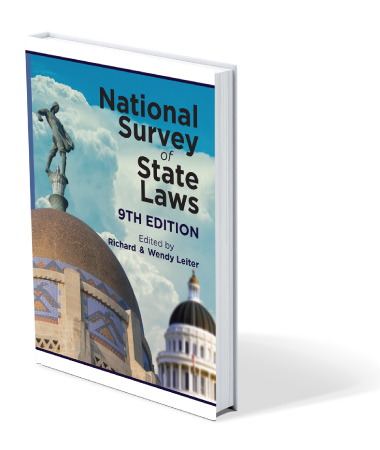 While the print version of the 9th edition is in the midst of being published, it is now available in our database version. All chapters reflect the most current law, including on topics such as:

Previous editions of NSSL have won a number of awards: