This collection focuses on the various uses for water, from hydropower, to agriculture, to drinking water, and how increasing pressures on water supply from climate change exacerbates historical tensions over who has access to water for what purpose.

The Clean Water Act, passed in 1972, is the primary federal law governing water pollution in the United States. Its reach is far: it bans the discharge of any pollutant into navigable rivers (without a permit), sets wastewater standards and water quality criteria, and sets a statutory definition for the term "waters of the United States." Learn more about one of America's most famous environmental laws with:

According to the Department of Energy, hydropower accounts for 6.3% of total U.S. electricity generation. Giant dams such as the Hoover Dam feature prominently in our conception of hydropower, but hydropower can be generated by small municipal facilities—or even through "damless" facilities. Learn about the electric role dams and hydropower play in our society with:

Every other use and application of water is secondary in importance to the ready availability of clean water for drinking. Explore this vital issue with:

Find titles related to the ever-increasing scarcity of water. Available titles include:

A complex network of dams, levees, and dikes attempt to corral and control our nation's rivers. Learn about these efforts with:

This subject covers the cooperative international efforts to use, protect, and manage international waters, and water issues outside the United States.

Irrigation is vital to agriculture. It artificially supplies water to crops through various systems of tubes, pumps, and sprays, rather than relying on the unpredictable whims of weather and rainfall. According to the U.S. Geological Survey, it is estimated that about 70% of all the world's freshwater withdrawals go towards irrigation. Water your meadow of curiosity with:

In simple terms, an estuary is an area where a freshwater river or stream meets the ocean. This subject covers these important bodies of water.

A river basin is the land that water crosses on its way to a river. Even if you do not see a river nearby, you live in a river basin.  Actions upstream affect the water quality (and quantity) of the river or stream downstream. River basins drain into rivers, which flow into an estuary, and then into a larger lake or ocean. Learn how natural water systems intersect with:

Part of the convenience of modern life depends on our advances in plumbing and waste disposal. These modern marvels make up a central part of any nation's water infrastructure. When they break down, it really, really stinks.

Find information on the mechanisms and large-scale projects by which water is stored and delivered for us with these titles :

Topics covered under this subject include riparian and littoral rights, prior appropriation, tribal water rights, and disputes over water claims.

This subject covers issues of water delivery, water sources, and the technologies used to supply the thirsty masses with water.

The deliberations of Congress provide insight both into issues requiring federal attention and their proposed solutions.

A congressional hearing is a meeting or session of a Senate, House, joint, or special committee of Congress. They are held:

Most hearings are published two months to two years after they are held. It provides a transcript of the proceedings for the general public.

Some Committee Prints of Note:

Some Congressional Hearings of Note:

What are these agencies?

Some reports of note:

The Code of Federal Regulations (CFR) represents the current statutory positions of the federal government.

Published annually, the CFR is divided into 50 titles (aka topics, subjects, etc.) that are the codification of the general and permanent rules published in the Federal Register by the executive departments and agencies of the federal government.

Extracted within this database are the following relevant titles:

Legislative histories present the journey of a bill as it becomes a law, with all its changes, additions, deletions and various legislative hurdles.

Some legislative histories of note included in this database are:

Access briefs filed in cases appearing before the U.S. Supreme Court on water law issues. These briefs contain the arguments and positions of parties in the cases.

Some of the briefs in this database include:

Browse hundreds of books, reports, treatises, and more ranging in date from the 1800s to present day. Trace the history of water disputes in the western United States, explore the geological differences in water rights, and discover the similarities between the water problems of the present with those of the past.

Some titles you may want to check out include: 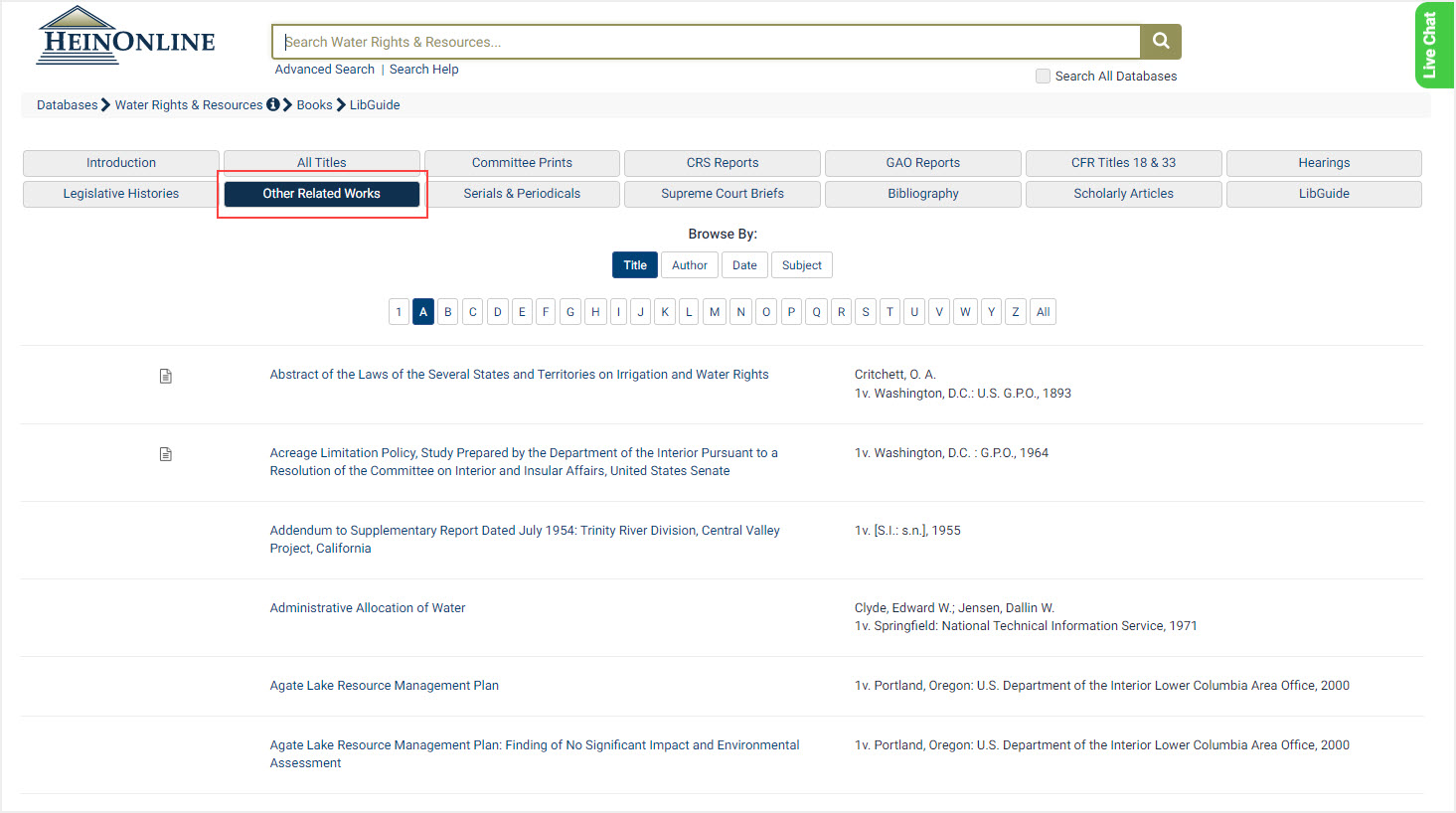 Browse various publications that serve as forums for the exchange of ideas, information, and legal and policy analyses concerning water law.

Including titles such as: 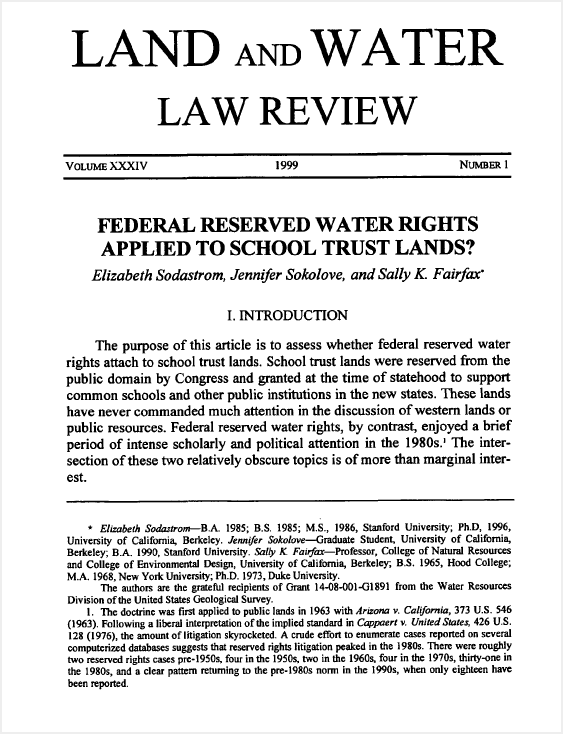 A list of titles hand-picked by HeinOnline editors. Use the linked OCLC number to find a physical copy of the book at a library near you.

*In order to access the scholarly article links, you must be subscribed to the appropriate HeinOnline collection(s).