Slavery in America and the World: History, Culture & Law

This HeinOnline collection brings together a multitude of essential legal materials on slavery in the United States and the English-speaking world.

Categorizations within the Database

On the home page of Slavery in America and the World, users will see an introduction to the topic of slavery from editor Paul Finkelman. Browse the subcollections of the database by navigating between the clearly marked tabs above the introduction. The subcollections categorize the material in this database by periodicals, slavery statutes, judicial cases, scholarly articles and other documents, UNC Press publications, and more.

Periodicals
Browse more than 30 periodicals that encompass various topics related to slavery and the law, including:

Slavery Statutes
Sorted by state, and including the United States as a whole, this section contains slavery acts for slave states dating back to the 1600s.

Judicial Cases
This subcollection includes Judicial Cases Concerning American Slavery and the Negro (1926-1937), as well as all slavery cases from 1800-1879, derived from Federal Cases Comprising Cases Argued and Determined in the Circuit and District Courts of the United States from the Earliest Times to the Beginning of the Federal Reporter, Arranged Alphabetically by the Titles of the Cases, and Numbered Consecutively (1894-1897). The subcollection also includes U.S. Supreme Court slavery cases from 1786 to 1880.

Scholarly Articles & Other Documents
This section includes articles, book reviews, cases, judges, law and statutes, and more. Links to these documents are also available throughout HeinOnline.

UNC Press Publications
This subcollection includes nearly 90 publications from the slavery collection of the University of North Carolina Press, including:

Bibliography
Includes more than 500 select titles of importance to researching slavery and the law. Each entry includes links to resources for finding the titles in your organization or a nearby library.

The history of American slavery is one of the most important chapters in the chronicle of the United States. It was an institution that for two centuries formed a principal basis of economic and social life throughout large parts of the country. It is, however, perceived that this chapter of American history is very insufficiently documented. The reports found in this title seek to describe any instance or complication or situation that could arise from the institution of slavery in a country such as the United States. Note: This title links to more than 4,500 cases!

The sixteen volumes of this title are divided into seven separate series and aim to illuminate how the legal system supported slavery. Each series deals with a particular legal issue connected to slavery. Some raise major constitutional issues; others illustrate the day-to-day nature of slavery and the law. The materials include the only known reports of some cases, lawyers' arguments in others, and pamphlet editions of judicial opinions. They illustrate the way both supporters and opponents of slavery use the legal system—and print media—to support their position. Overall the materials help provide a better understanding of the intersection between bondage and liberty, between law and slavery.

While browsing Slavery in America and the World, users will notice gold stars next to some of the titles denoting the "Editor's Picks." Paul Finkelman, the general editor, has chosen what he thinks are the most important titles to be found in this database.

Click the star icon to view the editor's notes on the title. For each pick, Finkelman has provided a detailed description of the title and its importance to the topic of slavery. 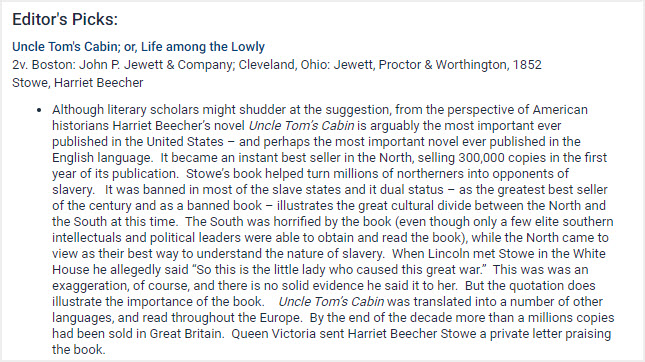 A few top editor's picks include: