LGBTQ+ Rights charts the gay rights movement in America, showing the civil rights codified into law in the 20th and 21st centuries, as well as the inequalities that still exist today.

Content in the database is grouped into specific areas of focus.

All of these subcollections can be navigated using the A-Z Index.

Homosexuality has long been legally punishable. Learn more about its criminalization with:

Don't Ask, Don't Tell was the official policy of the U.S. military on LGBTQ servicemembers from 1994–2011. Learn about this controversial policy with:

This subject focuses on how preconceived gender roles, gender identities, and attitudes about sexuality shape our culture. Titles include:

The AIDS epidemic disproportionally affected gay men in the 1980s and 1990s. Fears over HIV contamination still prevent gay men from donating blood today in the United States. Learn more about how HIV/AIDS continues to impact the LGBTQ community with:

This subject explores controversies over transgender athletes playing sports on teams that align with their gender identity with titles such as:

This subject explores military service by LGBTQ persons outside of the specific focus of the Don't Ask, Don't Tell policy. Titles include:

This subject encompasses how LGBTQ people are present and visible in myriad facets of our society, outside the specific areas delineated in other subjects in this collection. It focuses on other equality efforts through activism and legislation such as:

This title examines LGBTQ rights in other countries, with titles such as:

Religion and the LGBT Community

This subject explores the often controversial intersection between religious beliefs and LGBTQ people with titles such as:

This subject explores the demise of the Defense of Marriage Act and other landmarks related to same-sex couples gaining the right to marry.

This subject concerns issues affecting LGBTQ people in the workplace, including discrimination, and their recent protections conferred under Title VII in 2020.

In 2018, William S. Hein & Co., Inc. published Sexual Orientation, Gender Identities, and the Law: A Research Bibliography, 2006–2016, the third published iteration of an ongoing commitment by the Standing Committee on Sexual Orientation and Gender Identity at the American Association of Law Libraries (AALL). This volume, the only work of its kind, provides a bibliometric analysis of legal scholarship to evaluate scholarly trends, patterns, and the development of major themes and voices. It provides clarity of language incorporating a detailed glossary in the front matter of the volume. The information within this bibliography—the chosen citations, the publication details, the annotations both summary and evaluative—offers more than accurate details about each specific entry; it provides a story with a point of view as well as raw data for future studies that the editors and the contributors could not have anticipated.

In addition to this title, users can also access the two previous iterations in HeinOnline:

Sexual Orientation and the Law: A Research Bibliography Selectively Annotating Legal Literature through 2005

"Sexual Orientation and the Law: A Selective Bibliography on Homosexuality and the Law, 1969–1993"

This collection features an interactive timeline that illustrates the gay rights movement in America from 1950 up until the present day. View photographs and videos of the people involved, the documents discussed, and links to additional sources both within and outside HeinOnline to dive deeper into the events described in the timeline.

Need to speed ahead into the future (or fly back into the past) and don't want to click through the timeline point by point? Every point is plotted along a linear calendar, showing the year and month an event occurs, offering a visualization of where events fall in relation to each other. Users can also see a preview of the media type displayed on a point. To navigate this feature, click + pull across this linear calendar and select a desired point to jump ahead to on the timeline. Change how this linear calendar is displayed by using the plus or minus magnifying glasses to increase or decrease the zoom level.

HeinOnline editors have curated a bibliography of hundreds of titles on various LGBT issues. While copyright restrictions prevent us from adding the full text of these titles to HeinOnline, users can use the provided OCLC link to locate these titles at a nearby library, helping take your research beyond HeinOnline. Sort the list by Titles or by Author. 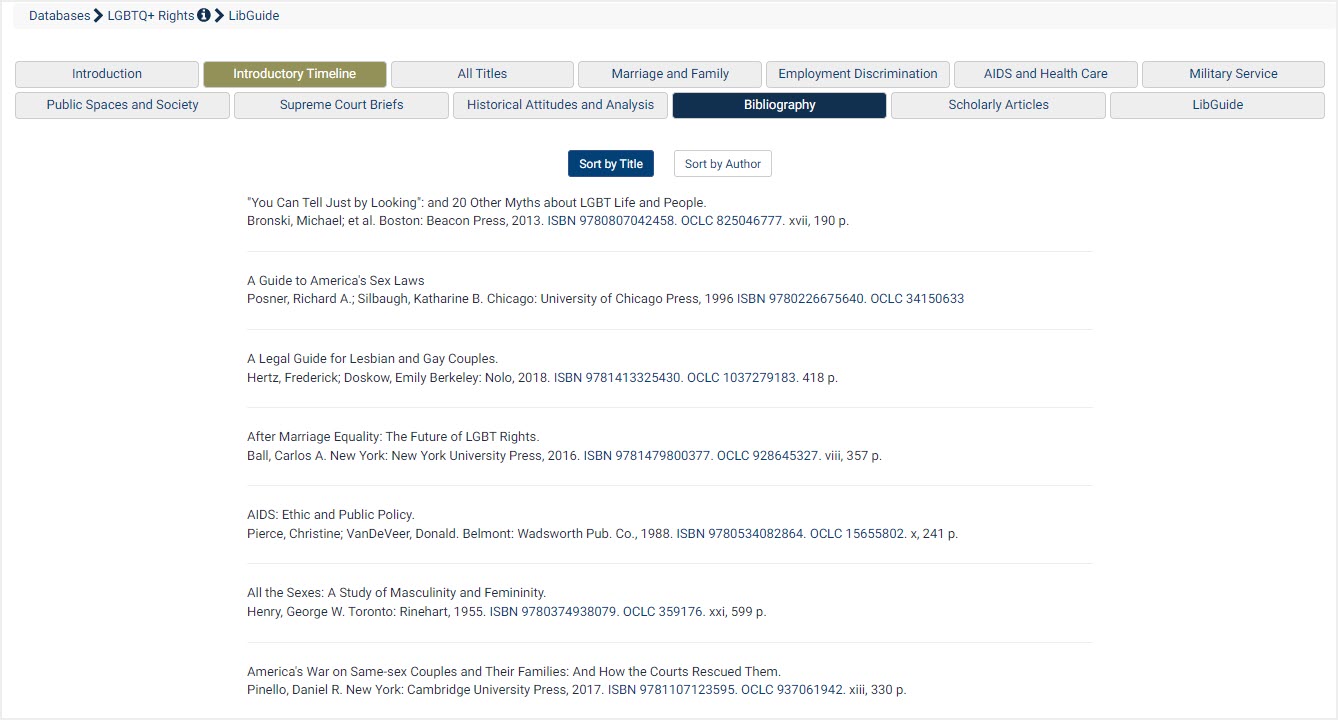 HeinOnline editors have curated a list of scholarly articles on various LGBTQ rights from across all of HeinOnline. By default articles are listed by Most-Cited; change the view to sort instead by Article Title, Author, Year (Newest First), or Year (Oldest First), or perform a Search within to find a specific article. 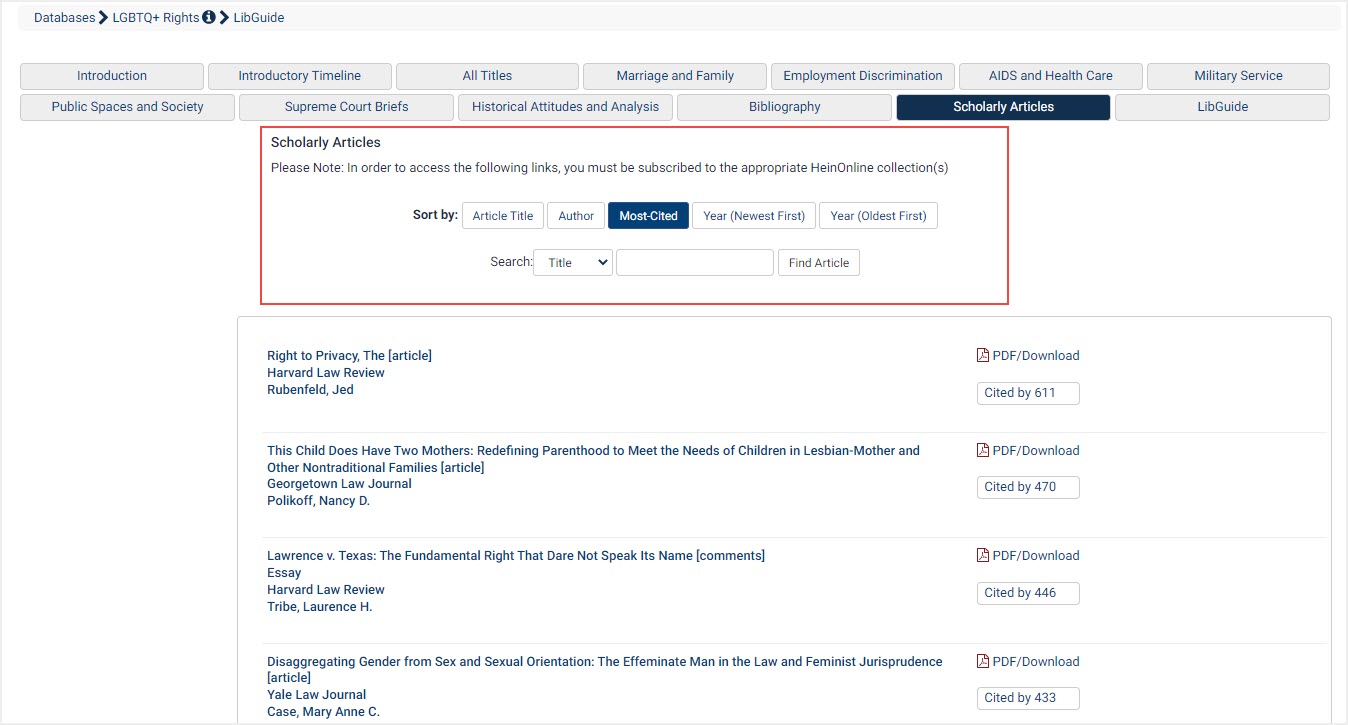 *Please note: in order to access these articles, you must be subscribed to the appropriate HeinOnline collection.