Based on the topical arrangement of 9,200 scholarly articles, this database presents a comprehensive treatment of business and legal aspects of sports and entertainment.

About HeinOnline's Business and Legal Aspects of Sports and Entertainment (BLASE)

Whether one is an avid fan or a casual observer, amateur and professional sports are a global, multi-billion dollar a year industry, and the forces involved in generating that money naturally beget both social and legal implications that affect every athlete, spectator, and even taxpayer living near the stadium where points are scored. Be it the debate over whether NCAA athletes should be paid to play or the Russian doping scandal, the long-term effects of concussion and brain injuries on NFL players or the lawsuit by the U.S. Women’s National Soccer team on gender discrimination and equal pay, athletes, agents, coaches, and fans are all bound up in something with implications well beyond just the love of the game.

With a similar wide reach, all of us at one point have purchased a movie ticket or cranked up the radio; more recently we’ve been culturally united in binge watching television shows and streaming or downloading music, legally or otherwise. We have all seen parental advisory labels on music albums and heard the arguments about the correlation between video games and violence. We have some passing familiarity with famous scandals of the past, such as the payola investigations of the 1950s and 1960s and the blacklist of McCarthy-era Hollywood, but perhaps less familiarity with how payola still survives in the Spotify age. As technology changes how we interact with and consume all our various forms of entertainment (and even creates new ones), so too do the laws governing how that content is produced, packaged, monetized, and consumed in the wider culture. Much as we may proclaim to “not be into sports” or “not care about Hollywood,” we cannot completely isolate ourselves from the myriad manifestations of sports and entertainment.

HeinOnline's Business and Legal Aspects of Sports and Entertainment aims to illuminate the critical issues in these two subject areas. It is edited by Frank Houdek and Ed Edmonds, who both bring decades of work on the literature of sports and entertainment to this enterprise. The foundation of BLASE is the focused topical arrangement created by the editors after their analysis of more than 9,200 periodical articles. Each topic contains a scope note that explains the focus of a given topic and the methodology used by the editors when assigning topics to a particular article. This approach, with some slight modifications, is also used for all of the materials in the remaining fourteen tabs, which cover resources other than scholarly articles.

Examples of the many business and legal areas covered in the database are antitrust and labor law, athlete and entertainer representation, content regulation, contracts, criminal law, gender and race discrimination, governance, injuries and violence, intellectual property, health and safety issues, and publicity rights. By providing a wide range of materials on these and many other topics, the editors have sought to produce a truly comprehensive treatment of the many issues connected to both sports and entertainment.

While the backbone of BLASE is its collection and arrangement of scholarly articles, this database also offers federal and state documents, including legislative histories, House and Senate hearings, reports, and committee prints, and reports from the Comptroller General, the Congressional Research Service, and the Government Accountability Office. It also contains full-text books, an extensive bibliography of other relevant publications with links to WorldCat holdings, and carefully selected lists of court cases with citations and brief annotations describing the significance of each of the highlighted decisions. Additional features include an extensive collection of links to relevant external websites, organized topically; full-text access to the valuable publications of the National Sports Institute of Marquette University; and material pertaining to the Athlete Agents Act, organized by annual meetings. 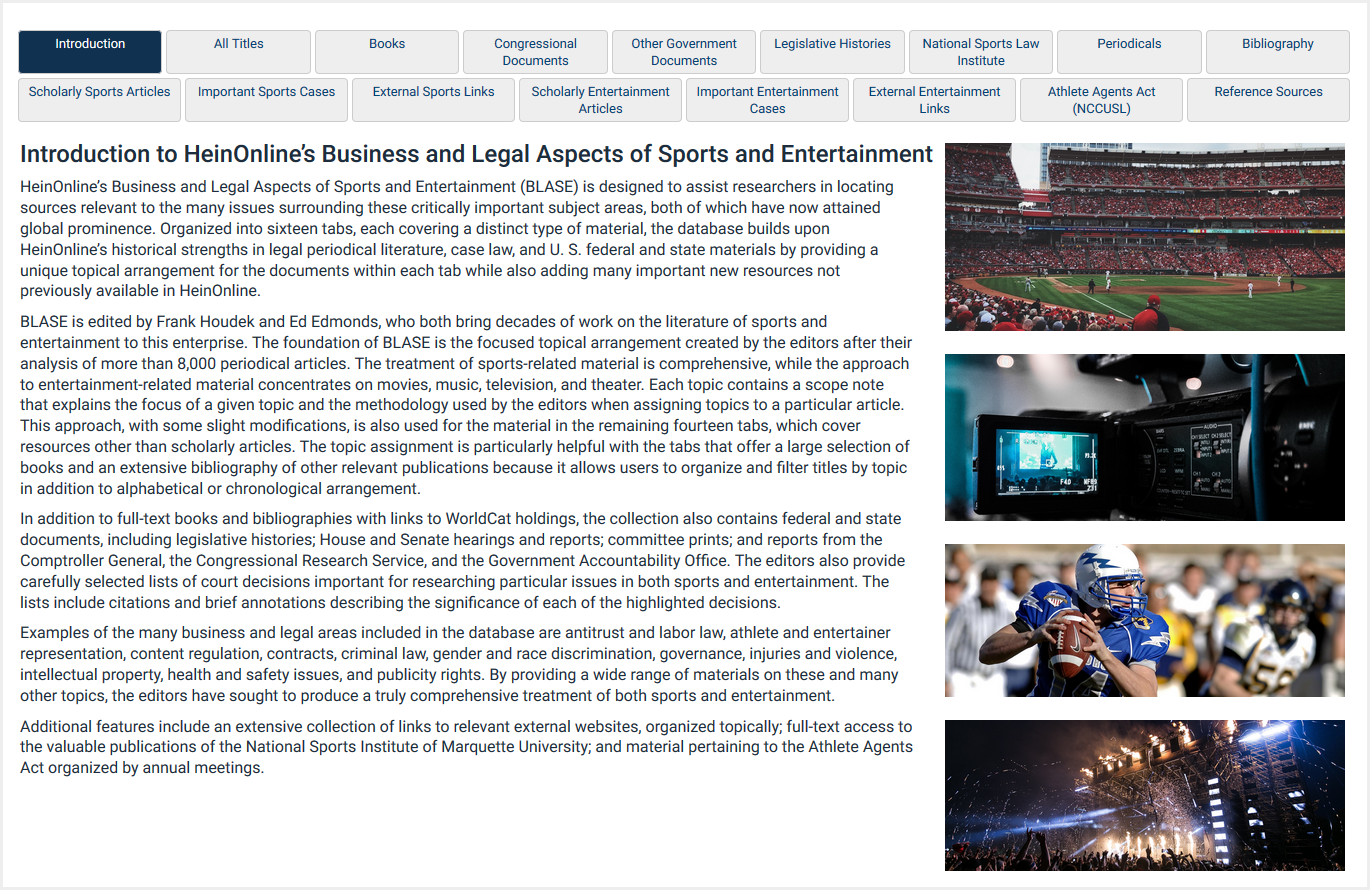